Put The Law Of Attraction Into Your Life 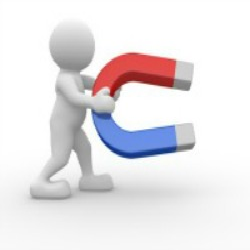 Putting the Law of Attraction into your life can empower you to change your course and be your own "genie in a bottle".

Many times when we want to change something about our lives, we look to others for solutions. What if you were empowered to change your course, and in effect be your own genie in a bottle...with the ability to manifest all your dreams from this point on?

Throughout history, scientists have created laws that apply to our universe.  The Law of Gravity, for example...is one in which we finally discovered what makes an apple fall to the ground from the branch of a tree.

Well, there’s another law that can help you with setting goals and achieving them. It can help quench your desires and fulfill your dreams… and it won’t cost you a penny.  It’s called the Law of Attraction. It is rooted in the belief that you can create whatever you want through your thought processes.

The Law of Attraction is More Than an Idea…

It has strong roots in Quantum Physics. When Dr. Stephen Hawking searches for the black hole and other infinite qualities of the universe, he's also looking for the connection that ties it all together.

As motivated as Dr. Hawking is to unravel the connections between energy and matter, he has yet to find the "Grand Unification Theory." When you consider how this brilliant man works tirelessly with extreme physical disabilities, you can see that he is actually putting this Law to work.

Whether or not he acknowledges the power of attraction, he is highly focused and positive about what he wants the universe to reveal to him. Perhaps he has already experienced the "Grand Unification Theory" but doesn’t see it because it's not part of a mathematical equation.

Can You See Attraction?

No, you can't - yet you know it's there. You can feel it when you are intensely attracted to an idea or a person. Attraction is a force that rides on energy. Your physical world may seem solid to the eye, yet it's a flow of energy.

Albert Einstein turned the scientific world on edge in 1905 with his simple, powerful equation, E=mc2. In this equation, he told the scientific community what possibility thinkers in the theoretical community already knew - that everything is made of energy.

Once you accept the flow of energy in all things, then you begin to see how the Law of Attraction techniques work. By tapping into the positive energy of the Universe, you can transform that energy.

Thank goodness, we don't have to be scientists or physicists or even understand the complex notions of Quantum Physics. We simply need to know that everything is energy, which we can transform by the power of our minds.

What Does This Mean to You?

Since energy is constantly in motion, it can be re-directed. You don't have to stand there waiting for something good to happen in your life, relationships or career. The Law of Attraction and Quantum Physics merge in one very important belief - we are responsible for the creation of our universe.

In your corner of the world, that means you can break out of old behavior patterns… a series of dead end jobs or negative views of yourself. You can be what you believe you can be.

Now that you’ve uncovered this secret law, you can use it to build self confidence and approach your life in a whole new way.  Be your own genie in a bottle…and begin manifesting your dreams starting NOW!

The Law of Abundance

© Personal Development On The Web. All rights reserved No reproduction permitted without permission Contact: barbara@personaldevelopmentontheweb.com